The Railway Assets Corporation (RAC) is a federal statutory body under the Ministry of Transport. It was established under the Railways Act 1991 (Act 463) through the Government Gazette No.16 Volume 36 on July 30, 1992. It became fully operational as an organisation on Aug 1, 1992, the same time the Malayan Railway Administration (KTM) was corporatised and known as Keretapi Tanah Melayu Berhad (KTMB). In other words, the RAC was established as a Government agency to help develop the railway industry in Malaysia to be at par with the railway industry in fully developed countries. This aspiration was realised with the formulation of the Railways Act 1991 and the revocation of the Railways Ordinance 1948.

Through the enforcement of the Act, the KTM was dissolved, and all its property and assets, as well as railway land under the Federal Land Commissioner were vested in the RAC, while the railway service operations were taken over by the successor company, KTMB.

Apart from being the manager and administrator of railway assets, the RAC also took over all KTM’s assets and liabilities to enable the KTMB to operate without having to carry the burden of past debts. This means that the RAC now functions as the caretaker and business planner to govern and interpret railway assets into valuable property capable of generating continuous income for the Government. The decision to corporatise the KTM as KTMB was made with the aim to reduce the national railway industry’s dependency on the Government.

In 2015, the rebranding of RAC’s image was implemented under the RAC Transformation Month Programme 2015. The effort was aimed at highlighting the corporate image and global nature of the RAC to suit its functions and ever-challenging roles, particularly in terms of empowering the railway sector in the country.

In this regard, the Corporation had created a new logo, acronym, and corporate colours to match its roles and functions. The new identity of the Corporation was officially put into use on Nov 19, 2015. 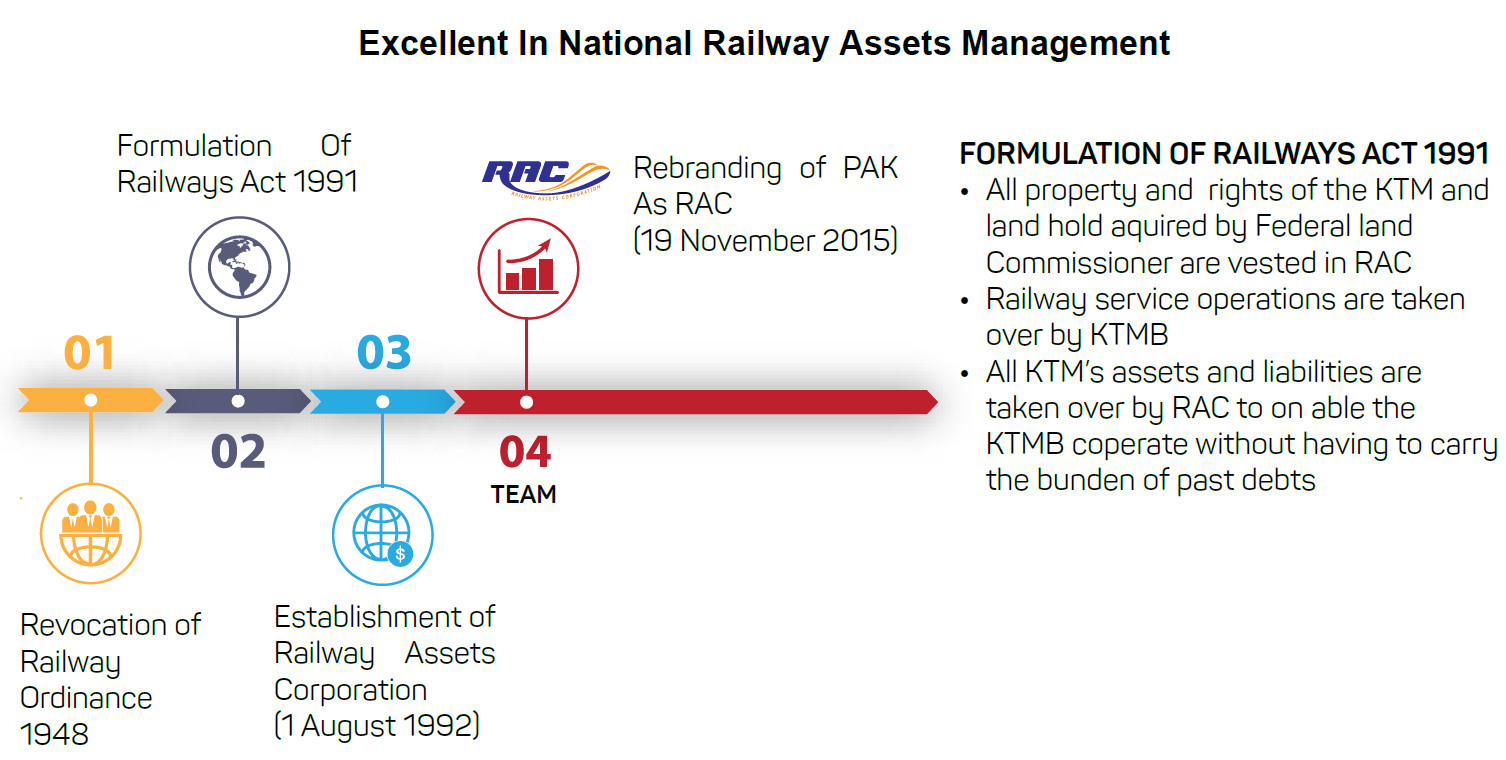 RAC is led by seven (7) non-executive Board of Directors’ (BOD) comprising representatives from various ministries and Government agencies. The appointment of the BOD was made in accordance with Section 89 (2) of the Railways Act 1991 (Act 463), which stated that the BOD shall be appointed by the Minister of Transport which consist of the following representatives;